The history of Haarlem Oil dates back to the 18th century and its history is connected to the Dutch alchemy.

Claas Tilly is reknown elaborating his Medicarnentum Gratia Probatum during the year 1696. As Claas Tilly had been honoured for the composition of the remedy known to cure kidney and bladder illnesses, he owed his success to Professor Hermann Boerhave, who added the point of detail in the production. Hermann Boerhave, Professor at the University of Medecin, Leyde, was one of the most famous doctors at this time. As H. Boerhave participated in the benefits of this medicine that rapidly found its popularity, the ethics of his profession prevented him from associating his name with an object from an industrial ownership.

The Genunine Haarlem Oil is produced in a factory equipped with sophisticated and expensive equipments. The ingredients follow a process that take several days, in which the particular chemical preparation and difficult analysis has permitted the Tilly Family to preserve the secret of the production during 200 years. Claas Tilly passed away during the year 1734, after being successful in the affair. His sons, Koning Tilly, followed by G. Koning Tilly succeeded him. Read More 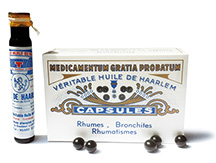 Since the 19th century, numerous studies have proven the importance of sulfur in our body
It is therefore left to put forward in an irrefutable way, that the new properties acquired by the sulfur in the combination, could confirm that Haarlem Oil is an essential source of bioavailable sulfur in the alimentation.
The studies show the exceptional bioavailability of sulfur contained in Haarlem Oil and another study shows the SOD action (superoxide oxydismutase).
The penetration of the secret by this particular molecular structure is left to the knowledge of science. It is up to this generation and the next generation to continue the research and not for the get that the alchemists are still working on this elixir. Our knowledge increases; we have the everyday knowledge of biochemistry on the central role of sulfur; but remember that Genuine Haarlem Oil will never change: it is a precious heritage. Read More